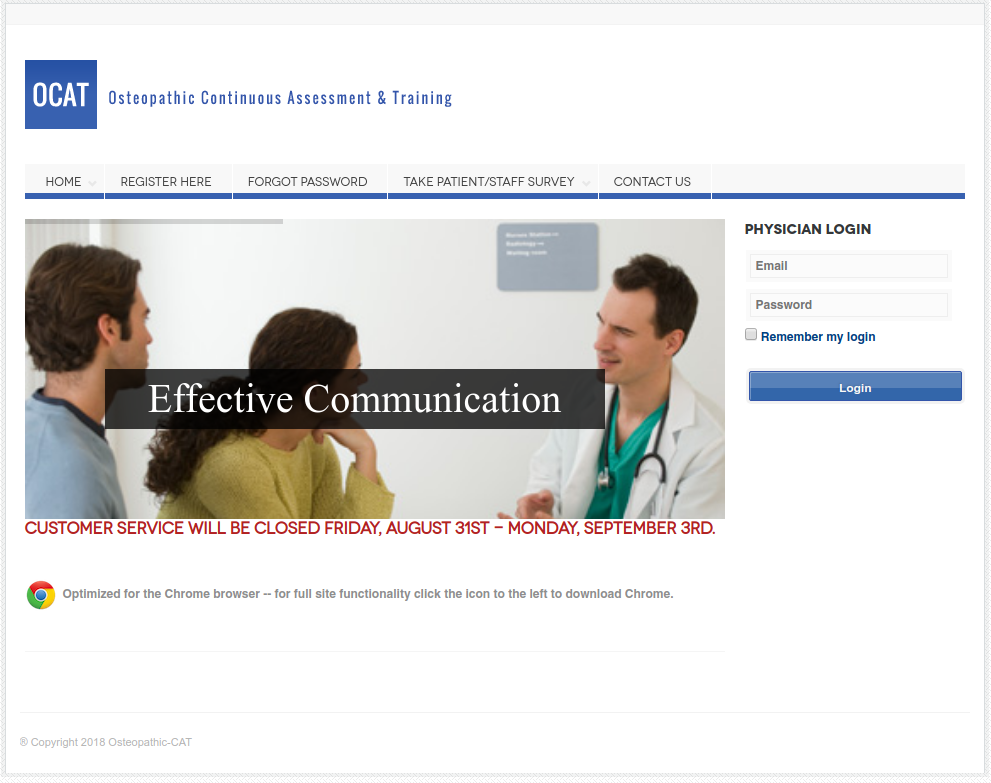 OCAT has recently evolved into a fully contained training system, allowing it to not only track surveys and data entered, but it will also effectively score tests taken, completely automated. It does this task based on some pre-defined parameters entered by admin staff, thus allowing the system to give, then score tests taken by Doctor's and instantly give them results.

In the frontend interface, it allows not only Doctor and Patient entry for surveys and tests, but it also has entry points for Board Administrators, to track Doctor's and Patient progress through the system.

Using a built in permission system it allows each user to have access rights to different areas of this front system.

We are currently operating on V2.1 of the system, after having upgraded a year or so back from V1. V2 comes with faster protocols and a completely revamped Survey system from the ground up, to make it faster, and better storage of the data entered. The V2 upgrade was completed in 2016.

In V2 of the system, we included a complete graphing protocol for the survey results, this data is compiled server side and presented to the Doctor at the end of their survey sessions. For our graphing system we used HighCharts, for it's easy of use, and beautiful graphs!

OCAT is a wonderful system we have had the pleasure of working with the Board of Medicine in Illinois on now for about 5 years. This is currently an ongoing project that we continue to work on and upgrade on a monthly to bi-monthly basis.

This project has evolved over the years, from a simple assessment system, to a full-fledged training system for Doctors in the state.

It contains both backend and frontend applications and communicates with outside API's for other medical boards.

OCAT was built using the latest in PHP when it was built. Over the years it has been upgraded to keep up with PHP7 upgrades and changes that have come along.

The database of OCAT was developed in MySQL, at the time of writing this there is talk about migrating to PostgreSQL, simply because of the sheer volume of data contained in the system PostgreSQL would handle that data in a much better way.

The backend is designed using our own in-house framework for structure, forms, and database access. The same framework most of our systems use, we have developed this in-house framework over the many years, to make the task of back-office systems a simple, and efficient task for all our customers.

Hours of Operations:
Monday - Friday
8 AM to 5 PM EST